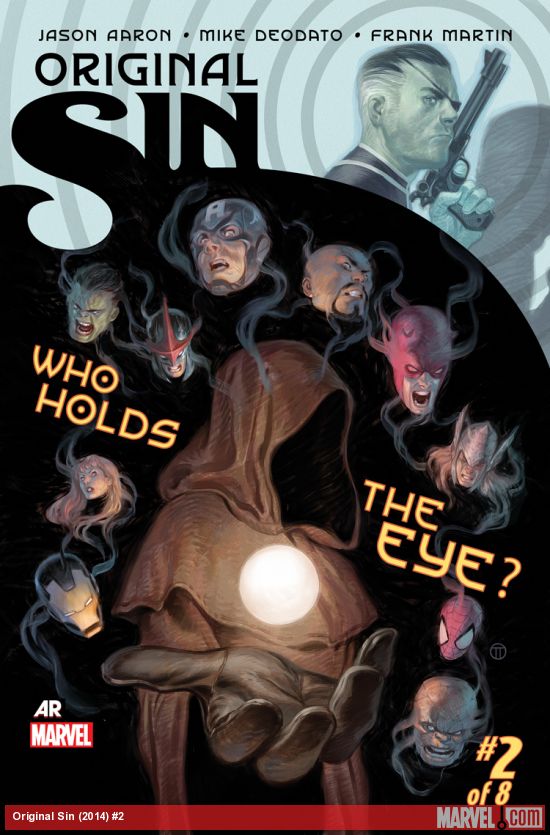 Nick Fury continues his chase for the Watcher’s murderer, which started in Original Sin #1. And the clues are going to take him to some strange places. And as the cover screams we all wonder, who holds the eye?

Ant-Man, Black Panther and Emma Frost explore a monster graveyard in the middle of the Earth. While Dr. Strange and the Punisher look for some clues way way way out of town. In New York, Captain America and Nick Fury chase another Mindless One which leads them to a penthouse infested with a pack of these tortured creatures. The whole operation seems to be led by a hooded figure holding the eye of Uatu. The villain stares into the eye hoping that it will open its secrets to him. As Fury’s colleagues encircle the villains it is revealed who holds the eye.

Here is what I learned. Nick Fury’s current flying car is Bette. Bette was always his favorite! I felt like he was seriously channeling Agent Coulson in his feelings about his flying wheels. But otherwise Fury is Fury with his determination and his quick decision-making.

Why the eye? Because the eye has seen everything. The eye is full of secrets. And that is what the villain wants to know, what sins has the eye seen? Sadly for the bad guys the eye is not easily giving up it’s secrets to anyone.

There was a lot of action in this story. There was punching and hitting and explosions. It felt more like a battle to me than a detective story. Maybe Fury could channel Batman! I thought that detective piece would give us another side of Nick Fury. Instead we are getting what he does best, bringing the heat!

It seems Tony Stark does not need pants to track a killer!

This issue has fewer pages and the price went down a buck. I can live with that choice. $5 an issue was going to be something that could have led me to abandon this series.  When you use the included digital code you get with the digital issue a Ales Kot Secret Avengers story, “Original Sin: Secret Avengers” which details the ramifications of Fury Jr.'s first mission failure.  The story includes Coulson and a flying car, so there is something for every Agents fan in this digital edition.

Hitty hitty hitty, it is the opposite of talky talky talky. I feel like there was a lot of fighting. And the issue just did not hit my personal preferred balance of action and story development. At least Jason Aaron did reveal who holds the eye. But as issue 2 of Original Sin ended, I don’t know if I felt any closer to finding the Watcher’s killer.