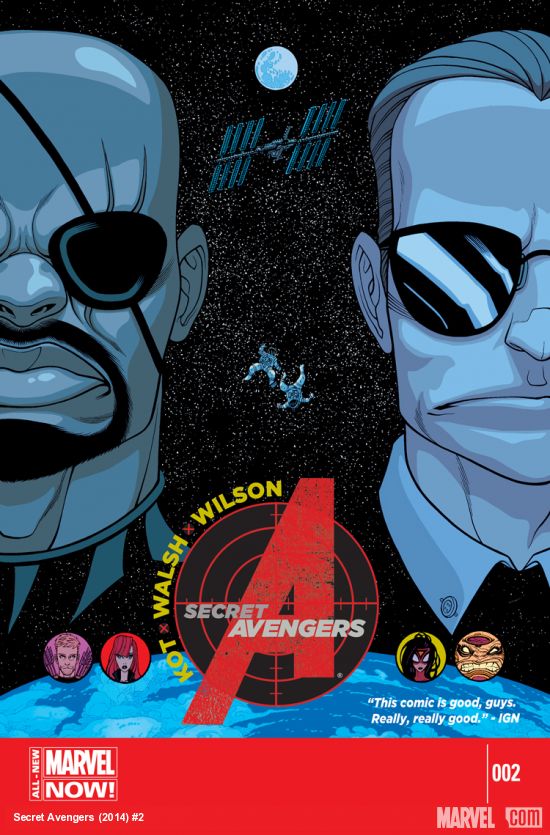 Okay, I am still not completely warmed up to Secret Avengers volume 3.  But I am here to stay as long as this really is a S.H.I.E.L.D. book.  Yes, I would love a book with the whole Bus Crew, but I will continue to see it as a win if Coulson is in print!

S.H.I.E.L.D. is having a bad day.  Coulson and Fury find themselves adrift in space with no hope of rescue.  They will either suffocate in their space suits or burn up on re-entry into the atmosphere.  But at least they have each other!  Meanwhile Black Widow, Spider-Woman and Hawkeye are in space suits of the own as Black Widow’s S.H.I.E.L.D. issued car continues to fly straight up towards the clouds.  And abroad the helicarrier Illiad, Director Hill faces down her would be assassin with only M.O.D.O.K. and his mad science crew to save him.  Of course before he can save her he probably should stop the S.H.I.E.L.D. satellites causing havoc falling from the sky.  What’s next, Hydra?

I have decided to go positive.  Throughout Secret Avengers I have complained there has not been enough Coulson.  Coulson never got to go into the field.  Coulson never got to be a key player.  And Coulson rarely ever saved the day.  Thank You Mr. Kot for putting Coulson front and center, despite the fact he is floating to certain death!  I really enjoyed the Coulson/Fury moments since you get to see how deep their friendship runs (or maybe I should say ran).  Overall, it was a win.

I am a little confused by the preamble.  It states that Hawkeye was not invited because he brings problems with him.  Hill did not invite the archer.  But that is not quite true and seems to ignore the conclusion of the last volume of this title.  Hawkeye walked away!  Yes, Hill may not want him because he lacked staying power.  Or he did not agree with her vision.  But it seems to completely ignore he was a Secret Avenger, which is something that they should play up on in this title.

M.O.D.O.K.’s Mad Science Lair is on the Illiad.  This is great because it means that M.O.D.O.K.’s inventions are mobile.  And the lair is cool with an assistant you can see the brain of!  It was cute watching M.O.D.O.K. try to save Hill.  And it was very endearing that he wants to be seen as a hero.  But his true colors really do shine through, it is all about M.O.D.O.K.!

AC is having a rough April.  On the small screen Phil has issues.  In the comics he is floating to his death.  But it seems in both cases a Nick Fury has his back.  And in the end is that not all anyone can ask for?