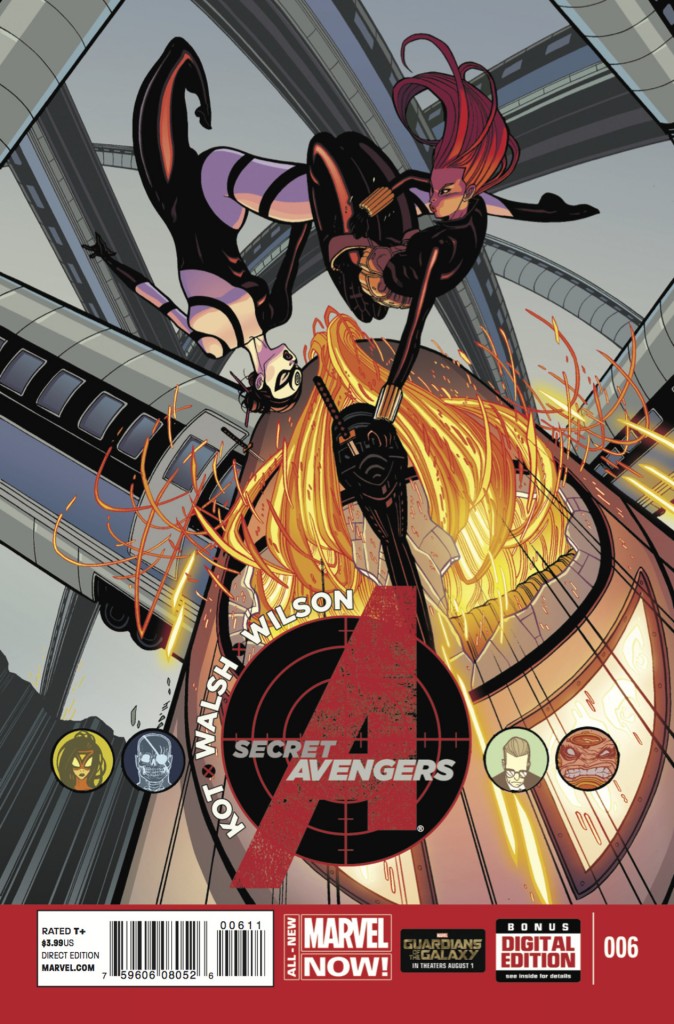 I love Secret Avengers and never have any constructive criticism to give it. Oh man, another cover I do not dig at all. Geez, I hope we get something in issue number 6 that gets my attention.

Lady Bulleye continues to be alive and has hijacked a Japanese bullet train. All she wants in a return is Black Widow and her one on one! Hill sends Black Widow with Spider-Woman in tow to free the train and commence with the full on bullet train brawl! Hill sends Hawkeye out on a much different mission. She charges him with chasing down Agent Coulson, who is on a search of his own trying to find out who set him up in an ambush. All is revealed to Coulson and Hawkeye trailing behind him, leading to the most awesome fantastic indescribable cliffhanger ever! M.O.D.O.K. and Hill continue to mull over who impregnated the Fury and worry that that a mastermind is coming after them.

Other than the final page, Hawkeye is the star of the issue. He mentions a Steven Segal movie in reference to Lady Bulleye’s bullet train blitz. And he admits to being much smarter than he acts. Everyone knows this has to be true. Seriously, you have to be intelligent to lead the West Coast Avengers! However, he still has not figured out this title had a previous volume with him on the roster. Oh Hawkeye, as you reach that final page all the wonderful things you see.

There is a lot going on in Ales Kot’s story. In fact I had to go back and re-read issue 5 and this issue to make sure I caught everything. For example, I totally forgot how Nick Fury Jr. found his way into a coma. But maybe just maybe Kot is taking aim on where I want this story to go. He already showed us in the last installment there is a complex tale being woven in front of us and it took the direction I most wanted it to go…with a super plus in the end that makes this my favorite issue to date thanks to one lovely page. Maybe I can have my cake and eat it too.

And yes, I’ve left some hints to the awesomeness throughout this entire review! But I feel like M.O.D.O.K. is doing the same thing, dropping hints to thinks he is not telling Hill.

Artist Michael Walsh, you are winning. One page, one final page is all that was needed for me to declare this issue a triumph. I have a feeling what Agent Clements and I will be looking to get commission knock-offs of this one-page wonderfulness. Seriously I need me some cash! Cover, what cover because it is the last page that makes this issue worth every penny!