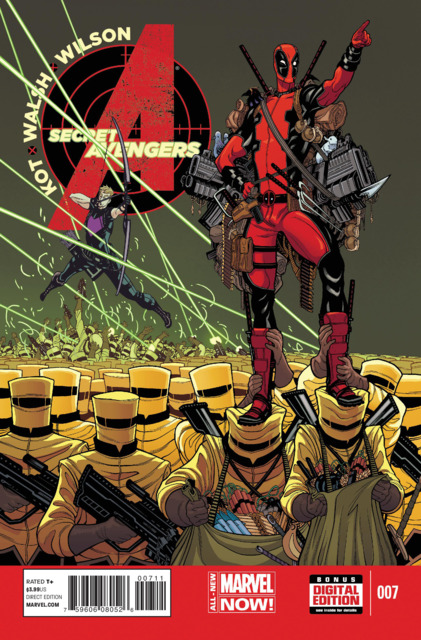 Seriously, do you know how hard it was to not tell you that Deadpool was the big reveal in Secret Avengers #6?.  Seriously I was pumped, but since the Tradd Moore and Matthew Wilson cover of Secret Avengers #7 lets the cat out of the bag, and is brilliant, I can now tell you why I had a skip in my step as I walked out of my local comic shop.  The answer is of course Deadpool, because I love me some Deadpool!  Seriously, if you have not seen issue 6 yet, you really should grab a copy just for Michael Walsh’s final page with Deadpool.

Deadpool is in the house and he introduces Hawkeye to the A.I.M. Clint Barton Appreciation Club!  And he attempts to explain to Hawkeye that they are part of something called a “comic book” and Deadpool has all the spoilers.  Vladimir and Hill attempt to help Spider-Woman get past her feelings of losing Black Widow in the field.  And Hill shows a growing trust in Spider-Woman.  And this includes sharing potential links between Vladimir’s creators and a S.H.I.E.L.D. employee.  Meanwhile, Coulson continues to struggle with Posttraumatic Stress Disorder (PSTD) and searches for a S.H.I.E.L.D. mole.

I want to be the biggest cheerleader of this book, though I have not always been.  But I am going to pile a giant amount of praise on writer Ales Kot.  First, his use of Deadpool is brilliant and funny.  He gets the anti-hero and uses him well in breaking the fourth wall, having a conversation between character and author and hinting that this story arc is really big.  Deadpool story wise foreshadows that big events are coming and we do not have the full story.  And in a long-game like this having Deadpool come in to speak to these facts works really well to get the reader reengaged.  And the banter between Kot and Deadpool is really well done and even hangs a lampshade on some things like critiques that Kot is copying Matt Fraction’s style.  Though I did not find Fraction’s inclusion of himself and creative team in Fantastic Four nowhere near as well done.  Second, we get our first letters column where Kot is taken to task about making PSTD a comedy tool.  Kot makes it clear that in the long game that Coulson’s PSTD is real and meaningful.  Coulson is not suffering just for laughs.  Coulson is experiencing this very real and serious malady for a serious and important story reason.  And perhaps, Coulson’s struggles can help us discuss a very real problem.

Deadpool is totally spilling the beans, Clint it’s a comic man.  I love that the craziest character speaks the truth of the situation, but also makes it clear for those on the page it is real too.  Deadpool has to be very careful to withhold spoilers!

Michael Walsh, excellent job sir.  And as much as I have attacked the covers this Moore and Wilson cover is absolutely fantastic.

Maria Hill does show she has a heart.  Wilson graphically displays in a heartfelt way her concern for Agent Fury Jr.  She is not as cruel as she might seem to be.  And she needs someone to talk to.  If Fury Jr. was not in a coma she might rely on him, but Spider-Woman is the best candidate, especially since pretty much everyone is off the hellicarrier except M.O.D.O.K. (a villain), Vladimir ( a sentient bomb), Snapper (a henchmen not seen in this issue) and Jessica Drew.  So yeah, the crimson spider lady is really the best candidate to share your secrets with.

Coulson needs to stay under the radar.  He chooses some really interesting disguises.  But luckily he has the legs for it.  Maybe we could see some of this action on Tuesday nights!  Bring on the skirts and the mustaches!

S.H.I.E.L.D. has a Chinese counterpart called S.P.E.A.R.!  I guess H.A.N.D.G.U.N. was taken?  Actually this is a good reminder that despite the fact that S.H.I.E.L.D. does act everywhere it is currently not an international organization.  And it is largely a peacekeeping tool of the West and the United States.

Secret Avengers #7 is brilliant.  The cover made me excited to tear into the pages.  It is well drawn and written.  It has a great guest star that helps move the story along.  Hey, as long as everything is hugs and high-fives at the Clint Barton Appreciation Club, this agent will continue to be a happy boy.