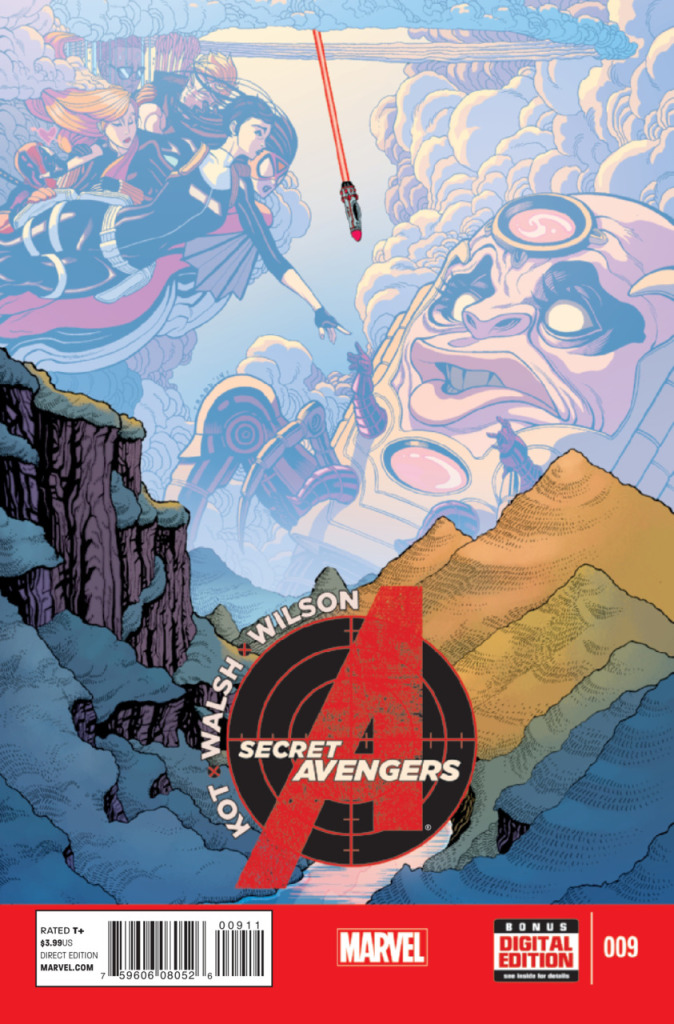 It is time for us to dispense with “the love” after the last issue of Secret Avengers and time for us to get dirty as we follow the conspiracy to bring Tlön to Earth. But maybe if not full on romance maybe at least we can find bromance in this issue.

Agent Hill fills in Spider-Woman on what she has discovered in the conspiracy against S.H.I.E.L.D. and her beliefs as to who is behind it. The goal appears to be bringing Tlön, or chaos, to Earth. S.H.I.E.L.D. cannot let chaos come, they are about order! Meanwhile in South America, Coulson drinks and speaks Spanish waiting for a sign. Deadpool and Hawkeye, also in South America, attempt to stop a former professional wrestler from igniting an Earthquake. And Deadpool makes a confession. Back on the hellicarrier, Hill moves against her opponent. And one member of the team takes a step towards a better understanding of self!

Deadpool and Hawkeye, you are my comic peanut butter and chocolate! I do love the boys when they team-up. And luckily for us we get a villain that is nearly as corny as they are! But the real question is can their bromance survive Deadpool’s confession? I hope so, seriously, we have a whole mini-series based on them right now. Though Hawkeye is very standoffish in that title. So maybe their bromance cannot stand up after Deadpool’s non-shocking confession.

I do not compliment the art a lot in Secret Avengers. Today, allow me to correct myself. Yes the Tradd Moore and Matthew Wilson cover is quirky. But I also enjoy it as a tribute to classic art in a fun way. Seriously, Hill and M.O.D.O.K. reaching out to each other is funny. Secondly Michael Walsh’s art really stands out to me in this issue. His close-up of M.O.D.O.K. towards the end of the story really sells M.O.D.O.K’s emotional state. And the page splash where Hawkeye leaves the drilling platform speaks in simple visuals about the situation and Hawkeye’s determination. I do think Walsh is really growing on me. But then he has drawn some great Deadpool pages over the last several months to warm me up.

Coulson, what do I think of Coulson. Well, this is not the Coulson we get on Tuesday nights. When live-action Coulson is down he gets the 1,000 yard stare and quits sharing his feelings. When Cheese Coulson is sad he gets drunk! Yeah, they just do not match up for me. And let us be honest, we have about 2 months to get Tuesday night Coulson into the Marvel 616 because he has to lead the comic book Bus!

Deadpool and Hawkeye, I believe you bros can make it. Now Coulson and Hawkeye on the other hand, that is so over. Because the Great Culling is coming and it appears that Coulson and Hawkeye are having some interpersonal issues. The romance, the bromance and the acquaintanceships all appear to be ending as Tlön is becoming very real!