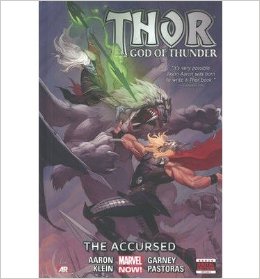 I believe I have said it before but I have never been a huge fan of Thor books. But a major win for me in the All-new Marvel NOW! has been Thor. And as I peer at a cover with the Dark Elf Malekith fighting Thor on the heals of Thor: The Dark World, Marvel has my attention.

Thor God of Thunder: The Accursed opens with the three Thor’s returning home from fighting the God Butcher and resuming their lives. Thor the Avenger busies himself in today’s world by attending a S.H.I.E.L.D. cadet’s ball, bringing rain to the desert, spending time with orphans and veterans and reconnecting with his long-time love Jane Foster who now faces a challenge that Thor cannot defeat for her. Thor’s busy life is interrupted by the escape of the Dark Elf Malekith from Hel. Malekith and his followers launch a genocidal war against the other Dark Elves that have refused his rule. Thor leads a team from the League of Realms who faceoff against the villain. But leading a team that includes a Troll, Mountain Giant, Dynamite Dwarf and even a Dark Elf is an uneasy alliance. And the outcome of their efforts have deep political ramifications throughout the realm.

I was a little underwhelmed by Malekith in Thor: The Dark World, despite him trying to bring darkness to everyone. I think it is because I still do not fully know what that means. This Malekith is a terror. He is willing to kill with his own hands to get what he wants. He is incredibly smart and savage. And let us toss in the fact that his the greatest sorcerer of all the realms. The comic Malekith kind of terrifies me! He will kill everything in his way, and has a special place in his demented heart for Thor!

The interaction between the members of the League of Realms is fun to watch. A troll is never a good companion. And they have a lot of relational ground to cover if they are every going to be a proper team.   The team members have really cool designs too. Honeyshot the Light Elf is a fantasy mystic cowboy in design and is really interesting. And where else where you get to meet a Troll and perhaps get to like him.

The fight against Malekith is really well done. It is part sci-fi and part fantasy. And despite the possibility of becoming a hot mess, Jason Aaron has done a really strong job crafting this story together. Along with all these elements it is also a political story that reminds me of the tone of Captain America: The Winter Soldier.

Of course, Aaron’s writing is not all action adventure. The opening story that gives us a day in the life of Thor helps us to see Thor as a person with feelings and frustrations. And you do see that being a hero is not all throwing the hammer. He really does try to help as many as he can, even if that means attending a dance for a graduating S.H.I.E.L.D. agent. But Thor should care, as Aaron makes it clear that throughout history Earth has often been Thor’s anchor.

I really enjoyed Thor God of Thunder: The Accursed. The story features strong story telling on both the mundane and fantastic level. And while not a Marvel Cinematic Universe book, MCU fans are sure to enjoy this story with a shared hero and villain. All that’s needed for the perferct MCU Thor experience is Loki.