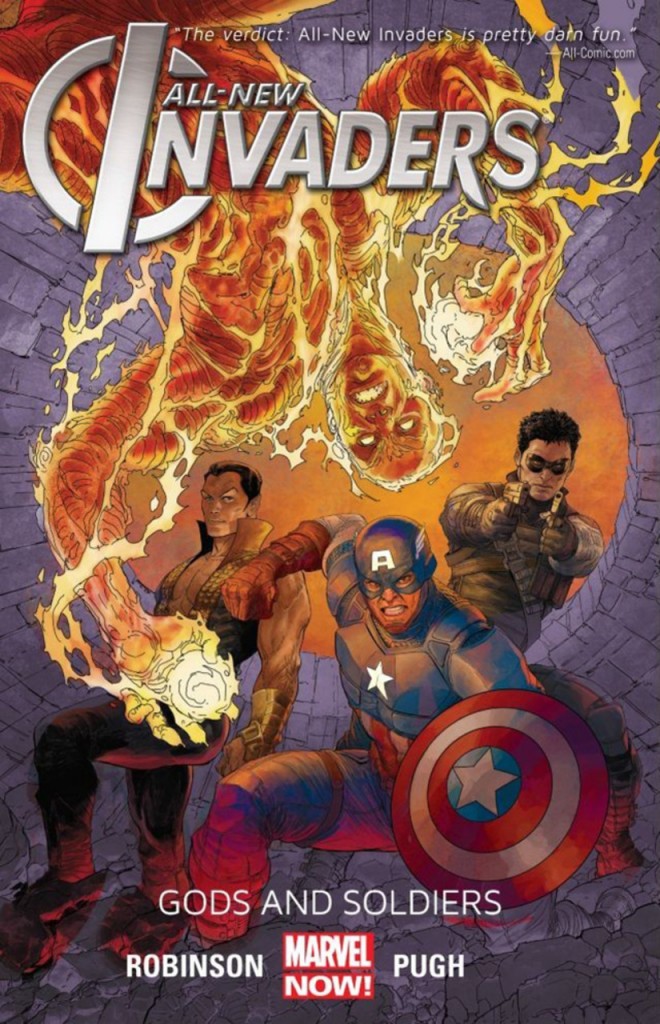 Preamble
I have spent a lot of time studying World War II.  But I have never read any of Marvel’s premier World War II superhero squad, the Invaders.  The team of Captain America, The Original Human Torch, Namor and Bucky sounds cool to me but that has never lead to action by picking up one of their stories.  So with James Robinson’s newly launched All-New Invaders I hope to correct this absence in my reading history.

With all of the recent cosmic level events, the Kree Supreme Intelligence is concerned with the safety of his empire. Therefore, he orders Tanalth the Pursuer to retrieve one of the Kree’s most powerful weapons, The God’s Whisper, on the world it was lost, Earth.  Tanalth intercepts the three heroes who last saw The God’s Whisper during the 1940’s; Namor, The Human Torch, and Bucky Barnes when they retrieved it from Baron von Strucker.  The God’s Whisper has the ability to control psionic enhanced individuals, so Gods.  The three broke the weapon into three pieces, and now Tanalth attacks each to recover the location of their portions.  To face this challenge and rescue a captured comrade the Invaders reunite and invade the Kree homeworld Hala.  The Invaders must fight Tanalth and a godlike hero under the control of The God’s Whisper.

Cap was left out!  The World War II portions of this story occur without Captain America.  Instead, a very different hero filled Cap’s role on his day off.  Yes, good old Major Liberty embodied the American spirit during the Invader’s capture of The God’s Whisper.  What, you do not know Major Liberty?  Well, he was powered by the spirits of American Revolution soldiers.  He was a true Yankee Doodle Dandy…and a jerk!

Captain America makes really good coffee.  Is there nothing he cannot do?

Bucky along with being a skilled assassin is a strong tracker.  It is his job at one point to find someone who wanted to be unfindable, the original Vision.  And when you meet him you can understand what a challenge the Winter Soldier had in front of him.  For someone who is the Batman of the Invaders, non-powered, Bucky proves himself to be incredibly important, like Batman.  In fact it is mentioned about one past adventure they won because of Bucky again.  Between the success of Captain America: The Winter Soldier, a new Winter Soldier series and his role in Original Sin, everything is coming up Bucky.  Maybe it is Bucky who will fill the gap after Wolverine’s death!

I do not know a lot about Jim Hammond.  But for an android I found him remarkably human.  He is a hero one can identify with and you feel pain as the Kree interrupt his life.  Hammond’s personality leads to some interesting discussions, what is he?  In fact at times I forgot he was synthetic.  And Agent Ben will be pleased to know that Robinson compares Hammond to Machine Man, through Captain America’s dialogue, and notes some key differences.  Could Hammond be something very very different?

Some fans may be shocked to find out that Ronan the Accuser is a good guy in this story.  He just got down fighting alongside Cap and the Avengers in Infinity.  So the Supreme Intelligence only acts now because Ronan is out of town…or Hala.

I will come right out and say it, I want to see more All-New Invaders.  I enjoyed Robinson’s story and Steve Pugh’s art in All-New Invaders: Gods and Soldiers.  I love the nostalgia factor; it is a whole team out of time.  And I like the mix with the very grey Winter Soldier, the arrogant Namor, the likable Torch and the moral compass of Captain America.  This is an enjoyable team book that should rely on interesting characters to tell great stories.