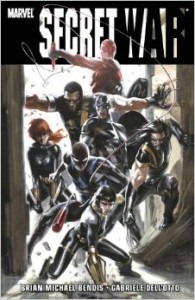 No, it's not Secret Wars!  And it is not even Secret Wars 2!  Secret War is a Nick Fury driven story that could be ripped from today's headlines, if it was not for the super villains and heroes that decorate this story.  But with an introduction written by an unnamed member of the intelligence community who claims this story is based in fact, well Brian Michael Bendis gives ups plenty of suspense.

Luke Cage is brutally attacked in his home.  And Nick Fury is one of the first to visit him at the hospital room, followed by a very angry Captain America?  The reader then discovers that a year earlier Fury found evidence that Latveria, which was an ally with the United States, was supplying technologically based villains with their weapons.  With a President unwilling to act Fury sends a strike team into Latveria of Captain America, Cage, Daredevil, Spider-Man, Wolverine, Black Widow and a unknown young agent named Quake to seek satisfaction.  Now after the attack on Cage, all of the strike team is being attacked leading to a massive New York battle!

How does one get an IV into a man with indestructible skin?  You don't, and doctors have to find other ways to deliver life saving medicine!  This is the sort of realism that seeps out throughout the book.  One really does feel with this tale that Bendis is attempting to bring  real life into the comics, even including the plot of international relations.  One could believe that this story did happen, minus the superpowers.

But let us talk about S.H.I.E.L.D..  This book is chop full of classic agents and intelligence on them in “The Files of Nick Fury”.  I enjoyed how these files recognize a story like Nick Fury vs. S.H.I.E.L.D. and explains how agents like Sitwell and Woo are back on the job.  We also get a list of intelligence clearance levels, which we might find helpful on Tuesday nights:

So Coulson has two more growth levels in front of him at Level 8.  And everyone above him has either been or should have been a Director of S.H.I.E.L.D..

Nick Fury has an image for himself.  He is a wartime general, even in a time of peace.  Like Jack Nicholson in A few Good Men, we need him on that wall.  He proves that he is willing to do want needs to be done to protect the peace.  He will not lose this war.  And he is willing to bend the rules and manipulate others to make sure that the job gets done.

For me this story helped fill in the gaps on Daisy Johnson.  Fury found her.  Fury saved her from a life she did not want.  And Fury trained her.  She is very loyal to her mentor.  And Hill is frustrated by the fact that a teenager has the highest clearance on the planet!  So here in this story I see some of the seeds of resentment between the two which will play out in Secret Avengers.

The art in this book is painted by Gabriele Dell'Otto.  And it really does feel more like fine art than comic book art.  It gives a sense that this story is different and special.  Though I will admit, while it is nice I would not want every comic illustrated this way!

We all have secret wars. but not all of us will manipulate a team of superheroes into a morally questionable situation!  But Nick Fury will.  Secret War shows us that Fury truly is the world's greatest spy and protector of the peace!