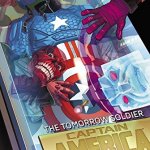 Preamble When I reviewed Captain America #25 I had to admit I was a little lost since between defeating Iron Nail and naming a new Captain America some stuff happened.  This included a new Zola attack and the return of Sharon Rogers.  Now with Captain America: The Tomorrow Soldier by Rick Remender my questions are […]